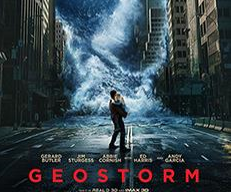 If you are a fan of action and adventure film and you enjoy watching science fiction production, that film should reach meet expectations. Unfortunately, I can’t recommend you Geostorm as the best film in its field. Instead of swift action it will make you laugh a lot. I was really looking forward to see this movie after I have seen the trailer. Oh, how wrong I was.

Starring Gerard Butler and Jim Sturges, the film tells the story of two estranged brothers who have to race to avert a world catastrophe. I can’t remember when I saw such a bad acting and shallow plot. Imagine that the times came when the climate on earth caused a total destruction of humanity. It was necessary to build a satellite which could control global climate. Years have passed and during this time noone even thought about the return of the previous catastrophe. And this is the beginning of a race with time, before worldwide geostorm wipes everything and everyone. Brothers, Jake who is satellite designer and Max who is a bureaucrat, try to figure out how to fix the weather control system, which starts to fail. Jake needs to go up into space and save everybody. The ending is not only predictable but also too exaggerated. During the whole movie you feel like you’re watching a movie that you’ve already seen. Of course, after many complications the earth was saved.

I was pleasantly surprised with how well the special effects had been made. I have to admit that seeing space, hurricanes, tidal waves or tornados in 3D was very impressive.

By and large, I wouldn’t really recommend it because despite special effects I have been left with a bad impression. This is nothing more than a tedious film with limited action and too much talking. From my point of view, the only advantage of Geostorm are excellent special effects.