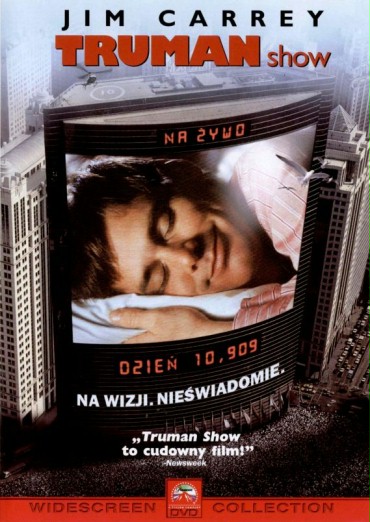 The Truman Show (1998) is a gripping and astonishing film that can be put in the genre of tragicomedy with the elements of fantasy. It was produced by Scott Rudin, Andrew Niccol, Edward S. Feldman, Adam Schroeder and well-directed by Peter Weir. Actors are very convincing in their roles, especially Jim Carrey who plays the main character Truman Burbank. He adds a lot to the film with his very remarkable acting. It is a hard role for a comedy actor to play the character who has to be very plausible. Sometimes he has the opportunity to be humorous and silly like we could see in the other movies like “Dumb and Dumber” or “Ace Ventura” but he is rather a warm-hearted person in the above mentioned movie.

The story unfolds in an unreal town located by the seaside. The plot of the movie arouses curiosity and the viewer desires to watch the movie to reach the climax, which is not very predictable and the story is full of unexpected plot twists. We can notice exaggerated dialogues full of melodramatic content because it happens in the artificial world where people are surprisingly pleasant to each other. It is hard for Truman to discover the secret even when he is very close to prove the truth, because he grew up in the well-balanced surrounding and everything seems to be perfect at the first sight. Christoph, the director of this imaginary world is responsible for the whole Truman’s world from the people that he meets or loves to the weather conditions. “We’ve become bored with watching actors give us phony emotions,” Christoph says at the very beginning of the movie and that misled him. He focused on the audience watching Truman’s life, but he forgot about Truman as a human being. Only a few people are interested in his feelings, i.e. Sylvia who falls in love with him.The film is close to reality, but there are two things which the creator of this imaginary world is not able to deceive – real feelings and emotions.

Truman’s world depicts some kind of a reality show, but the significant difference is the fact that he does not know that everybody observes him. When he comes closer to discover the secret he only meets pain on his way. We can imagine that it was hard to believe that he had been conned throughout his whole life. One of the most poignant scenes of the movie is his father’s return. The complex process of playing on Truman’s heartstrings is visible during the whole film but it has its apogee in the scene when his friend tells him that he would never tell him a lie and brings Truman’s father. I was impressed with the continuity in pursuing the goal by the main character and his courageous attitude to prove his suspicions.

Truman became a prisoner and a toy in hands of the imperious corporation, which lets millions of people forget about the real world and have the hope that there is a chance to have an irreproachable world bereft of lies and cruels. People feel an enjoyment of watching other’s life and this is the reason why nowadays we have a lot of reality shows. In the final scene we can see that Christoph is even ready to kill Truman to keep the entertainment action-packed. The director of Truman’s life cannot imagine his life without this show. I am very disappointed because of the fact that nobody has tried to stop Christoph in his actions to let Truman live a normal life.

We can see that the real world is governed by money and power which very often can trigger a disaster. It is the film that will change the way you think about manipulating people. “History is a teacher of life” – these words show that we remember some occurrences from the past when a sick idea of a one relentless person pulls blind crowd behind. If people have benefits, they tell a lie or do some cruel things, even if it hurts somebody. We need to remember about the thin line between reality and fiction. On a scale from zero to ten, I give this film a ten.