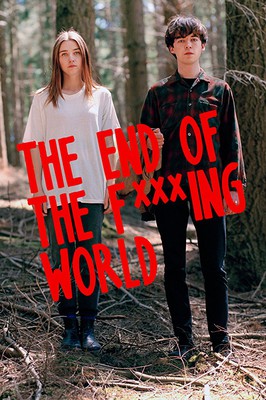 The End of the F****ing World is a British dark comedy-drama produced by Kate Ogborn. The series is very well-directed by Jonathan Entwistle and Lucy Tcherniak. We can’t watch this on TV, the series is available only on Netflix. It includes 8 episodes, each is 20 minutes long. I decided to write a review about this screening, because it is one of the most specific and addictive one I’ve ever seen. I can say, that it is kind of hard for me to pay my attention to one film or series, but when I saw The end of the F****ing World’s trailer on Youtube, I thought, that it was worth watching.

The first thing that catches the eye is the characters’ specific way of being, which we can easily connect with their hard life story and the situation in family. The series is full of wonderful characters.  Despite actors are newcomers, they did a very good job. Jessica Barden perfectly played a mean, brutally honest and rebellious teenager with a hidden hope for some peace in her soul. The second incredibly played character is deeply depressed boy, young psychopath, who dreams about killing someone, played by Alex Lawther. They presented those specific and hard roles really well. The screenplay seems to be tightly written, but it gives characters the opportunity to express their roles at the same time. It is easy to interpret, what can be either an advantage or a disadvantage.

The story unfolds in a lot of places. In characters’ family town, dangerous small districts or even in a stranger’s house. All those places are very simple, but the character of the situation gives them a certain atmosphere and mood.  The series is based on various plots like hard life problems, love, crimes, escaping from everything.  In every episode, the curiosity increases. Sometimes scenes can be full of tension. There are no very unexpected plot twists. Action is developing slowly. The series is very sad and moody. It contains also a few  funny bits, but it’s black humor, which as we know isn’t meant for everybody.  It gets extremely dramatic in places. All those moments are slowly accumulating and leaving wounds on characters. Final scene is powerfully sad and we can say that it is the summary of everything what they have come through.  Very important part in the series is the soundtrack. It emphasizes the dramaturgy and beauty of each event. It helps us feel like those characters and understand their emotions. The music connects us with the action and supports the plot. Most of the songs are not really popular, but they really fit the series and give it even more impact.

In my opinion The End of the F****ing World is an emotionally strong series. It is a Netflix must-see. It shows a very moving portrayal of people’s mental and social problems. I was personally impressed by characters, their style and their way of looking on the world. I don’t recommend this series to everybody, but if you like a little bit strange atmosphere, unusual characters and black humor, it is for you. On a scale from zero to five, I give this series a five.